After the $4 gas price spike in mid-2008, global car companies quickly adopted the near unanimous goal of producing greener more fuel-efficient cars for the masses. But opinions about how exactly to drive down the inherent cost of hybrids, electric cars, and clean diesel vehicles—to make these technologies affordable and commonplace—have broken down into two camps.

The Cadillac Converj, a sleek angular luxury concept plug-in hybrid, was introduced at the 2009 Detroit Auto Show.
Hybrid stalwarts Honda and Toyota are making a move to capitalize on their early investment in gas-electric technology by increasing production numbers, lowering costs, and offering hybrids for around $20,000. Electric car and plug-in hybrid startups, Tesla and Fisker, are hoping to enter the market with exotic green machines in the neighborhood of six figures—and then to demonstrate profitability, and slowly work toward follow-up models at $50,000 or below. General Motors is somewhere stuck in the middle when it comes to its plug-in hybrids, like the Chevrolet Volt.

The Volt likely will carry a sticker price around $40,000—steep for a Chevrolet product—and still not turn a profit for years. Bob Lutz, GM’s product czar, said, "In terms of recovering the cost from the technology, doing it in a Cadillac would have made it financially easier to do.” We don’t have to wonder what a luxury version of the Volt would look like. The company unveiled the Cadillac Converj concept vehicle at the 2009 Detroit Auto Show.

Built on the mechanicals of the 2011 Chevrolet Volt, the Cadillac Converj won rave reviews at the show, with its aggressive coupe profile, angular lines, and sleek, elegant exterior. An Escalade Hybrid, it definitely ain’t. 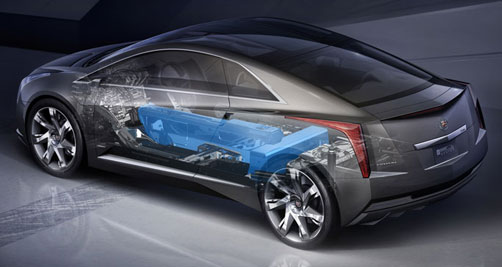 Those underlying mechanicals, now known as Voltec (nee E-Flex), are largely unchanged for the Converj. They include a 16-kilowatt-hour battery pack powering the 120-kilowatt electric motor that drives the front wheels, for an all-electric range of 40 miles, with a range-extending 1.4-liter engine to power a generator that recharges the pack for another 300-plus miles of travel. While the control electronics might be retuned for slightly better performance, the Converj wasn’t about technical specs. A company press release states: “The four-passenger Converj concept is intended to show how GM’s revolutionary electric propulsion technology…can power a luxury coupe with a typically Cadillac ‘no compromises’ design.”

The “aggressive, forward-leaning” profile is supported on large wheels and tires: 21-inch diameter in the front, 22 inches at the rear. A glass roof incorporates solar panels that can power vehicle accessories, and like the Volt, the Converj minimizes aerodynamic drag. It has a full belly pan to smooth airflow below the car, the grille openings are minimal, and its outside mirrors were even replaced with video cameras to eliminate the drag they added.

The Converj also uses the Magnetic Ride Control suspension pioneered on Cadillac’s pricey XLR two-seater. In this system, damping is provided by electrorheological fluid whose viscosity changes millisecond by millisecond as a magnetic field affects the magnetic particles suspended in it.

The Cadillac theme of “art and science” is most visible inside the concept, which blends high-tech electronics with luxurious materials.

Black leather and white synthetic suede upholstery is matched to aluminum and wood-grain accents, and the designers attempted to use sustainable materials. The suede comes from “post-industrial content” (when was the last time you heard that about a Cadillac interior?), the carpeting blends in real wool, and the headliner is made of silk.

The instrument cluster uses an organic light-emitting-diode (OLED) display, just like the crispest and priciest monitors. All the controls are operated through a touchscreen (think iPhone), and the exterior cameras that supplant rear-view mirrors display their images on a screen high in the instrument panel. 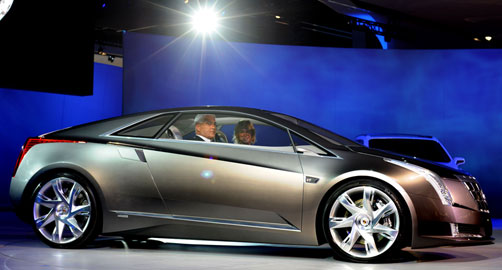 Bob Lutz arrives on stage in the Cadillac Converj at the 2009 Detroit Auto Show.
But let’s hope that its stylists did their homework on the aerodynamics. If the Converj goes into production, we hope it won’t vary as much as the 2011 Volt does from the very different shape of the concept shown in 2007, which was striking but proved wildly un-aerodynamic. The design of the Volt's more aerodynamic production version is much more sedate. The Dallas Morning News said it “looks like the quintessential rental car.”

Perhaps Lutz and the gang are still smarting from criticism about those design changes. At the Detroit Auto Show, he emphatically stated that if the Converj goes into production, it will look “exactly like” the concept version. That’s a big if. Before the Converj goes into production, according to Lutz, GM has to prove four things: that the company has the money to make the vehicle, that it’s a higher priority than other vehicles in the works, that the Converj can make money, and that there’s customer interest. "It's going to be financially tough sliding," said Lutz.