2012 awaits the entry of the newest offering from Shelby Super Cars (SSC),the 2012 SSC Tuatara. This car is aimed to unseating the Bugatti Veyron SS as the fastest car in the world. Jerod Shelby,founder and CEO of SSC,unveiled the Tuatara in the presence of a few people from the industry. Jerod Shelby is not related to Carroll Shelby,the legend behind all those muscle cars. The name of this supercar is derived from the Maori language that describes a resident reptile from New Zealand,Tuatara,means “peaks at the back.” 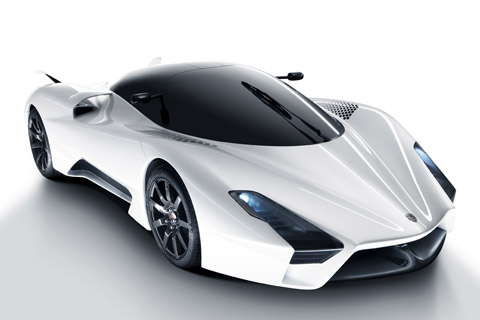 Shelby and his team of 16 engineers have put their skills together to produce a high performance production vehicle in the SSC Tuatara by highlighting this rear wheel drive,1,350 horsepower speedster. SSC produced the Ultimate Aero that was able to topple the record established by the Bugatti Veyron. In 2007,the Ultimate Aero TT had a run of 256 mph on a four mile stretch of a Texas carriageway. The Volkswagen owned Bugatti,not to be denied,came back with the Veyron SS (Super Sport) and clocked a record 267 mph.

With the Tuatara,Shelby SuperCars intends to reclaim that distinction of being the fastest car in the world,by aiming for a record setting 275 mph.

As for the engine,Jerod Shelby’s team of engineers has come up with a rear wheel drive,quad cam (four valves per cylinder OHC),twin turbo V8 engine. This 7 Liter engine produces 1350 HP and revs up to 9000 rpm.

Braking is aided by traction control,ABS with servo assistance,and the use of carbon ceramic brakes by Brembo. It comes in at 2646 lbs (1200 kgs) curb weight,which puts it at 1407 lbs(638 kgs) lighter than the Veyron. Little,if any,change has been done on the suspension in which SSC keeps the coil over setup intact along with the triple plate carbon clutch mechanism.

Expectations are high on this new SSC Tuatara,with all those horses;zero to sixty mph should come in under 2.8 seconds. It has been claimed that its top speed will be at 275 mph,hang on to your seats for the final results.

The body design of the Tuatara was rendered by Jason Castriota,an Italian-American designer who has been instrumental in creating some of the best looking cars in the world. Among his creations include the best in the industry,Bertone,Ferrari,Rolls Royce,and Pininfarina. Castriota was unsure whether he wanted to take on the challenge presented to him by Jerod Shelby in designing this latest from SSC. 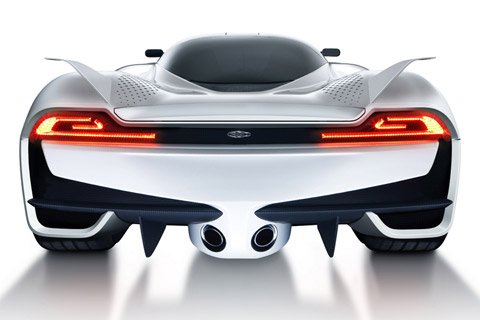 When he did take up the challenge,the result has become the ideal in combining form and function. The black teardrop shaped canopy splashed amid the white body provides a contrast in style and power. The classic shape allows it for a minimum of drag. Dihedral stabilizers (wings) add to the Tuatara’s performance and look. The winglets located in the rear not only improve aerodynamics,but also keeps the car together as it speeds up to 200 miles per hour.

Body and chassis are made of carbon fiber,except for those impact areas in the front and rear of the Tuatara. It also has oval cut outs in varying sizes that help release heat produced by the engine through the body. The Tuatara features an F-1 looking exhaust that functions as a diffuser in the rear. When looking down at this low slung supercar,the Tuatara can seem intimidating.

No one really knows what to expect what the interior of the Tuatara will look like. The total interior design has not been completed. It will have the necessary features in driving a two seater,such as the seatbelts and auto air-conditioner.

Speculation has it that the inside of the Tuatara will live up to its reputation in addition to providing easy viewing and access LCD central displays.

There is little competition in this area of supercars. The SSC Tuatara is expected to be priced at $970,000,while the Bugatti Veyron SS rings the bell at $2.4 million. If you have extra to spend,the other potential alternative is the Koenigsegg Agera,$1.5 million.

Whichever way you go,you have an international choice at your disposal;the SSC Tuatara from the USA,Bugatti Veyron SS from Germany,and the Swedish Koenigsegg Agera. Whether you’re looking for a showroom vehicle or one for the racetrack,chances are the Tuatara will push its competitors once again to the limits,watch for this fastest evolving DNA creation from SSC.