In an age of engine downsizing and emissions-reduction mandates, one might expect the V-12 engine—volumes of which never were very high in the first place—to hit the endangered-species list. But Mercedes-Benz and AMG are keeping the breed alive at least for the near future, sliding the brands’ mighty twin-turbocharged twelve-pot into the latest SL roadster to create the latest SL65 AMG. With a price tag expected to top $200,000, the new super-roadster will create a veritable glut of six-figure, 500-plus-hp droptops in Benz showrooms, joining the $198,675SLS AMG Roadster and the cheaper (at an estimated $140,000) 2013 SL63 AMG. The SL65 arrives this November. It will be available in 10 or so standard paint colors, the most important of which is brown.
More Power, More Gears, Fewer Pounds 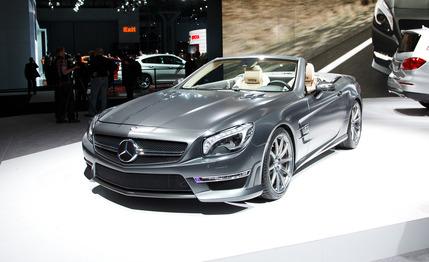 While the fundamentals of the previous SL65’s SOHC 36-valve, 6.0-liter V-12 remain essentially the same, the 2013 model gets new turbochargers with optimized airflow and an additional 17 hp, for a total of 621. Instead of raising twist in turn, torque remains capped at a rear-tire-melting 738 lb-ft. Mercedes modified the cylinder heads and engine management system to optimize combustion, and those changes, along with a new catalytic converter and an engine stop-start feature, are said to help lower emissions. Also significant is the new model’s switch to an AMG-tuned seven-speed automatic transmission, complete with four operating modes (Controlled Efficiency, Sport, Sport Plus, and Manual), in place of the old five-speed auto. A locking AMG rear differential is standard, and the car adopts electrically boosted steering.
However controversial the sixth-generation SL body may be with its blunt, graceless front nose, its aluminum-intensive construction pays big dividends in terms of stiffness and weight loss. The SL65 AMG is said to shed 254 pounds, which would put the car at 4250 pounds by our estimate. The additional power and reduced mass should help the SL65 AMG hit 60 mph in 3.9 seconds, according to Mercedes-Benz. We clocked the previous SL65 AMG to 60 in 3.8 seconds, though, so we’re expecting the actual time to be in the mid-threes. Top speed is electronically capped at 186 mph, and a “considerable improvement” in fuel economy is promised. (We saw 13 mpg from the last car.) 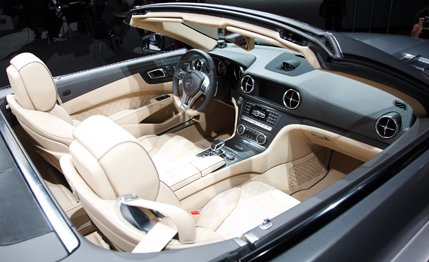 The SL65 AMG’s sport-tuned version of Mercedes’ Active Body Control suspension technology is a version of the setup installed in the SL63 AMG. As in other SL models, it offers “Sport” and “Comfort” ride settings; we didn’t notice much of a difference between the two on our first drive of the SL550, but we expect more differentiation on the AMG cars.
The SL65’s brakes have been beefed up to huge 15.4-inch discs and six-piston fixed calipers in front, and 14.2-in discs with single-piston floating calipers in back. Lightweight carbon-ceramic discs from the SLS AMG are optional. Making room for those platter-sized discs are titanium-gray five-spoke 19-inch wheels shod with 255/35 front and 285/30 rear tires. A set of multi-spoke forged wheels measuring 19 inches up front and 20 inches in back are available as an option from the AMG Performance Studio.
Equal Parts Esoteric and Collectible
On the outside, the SL65 AMG looks identical to the SL63 AMG in every way, save its conjoined-twin quad tailpipe design (versus the SL63’s four individual pipes) and, of course, “V12 Biturbo” badges behind the front wheels. Inside, the SL65 gets specific diamond-pattern stitching on its sport seats, door panels, and leather headliner, as well as a standard features list that includes pretty much every bauble available to buyers of lesser SLs. One standard feature for the SL65’s folding hardtop not offered on the previous model is Mercedes’ Magic Sky Control, which tints the see-through overhead panel at the touch of a button. AMG Performance Media (it provides onboard telemetry and engine data) joins the staggered-diameter wheels, the carbon-ceramic brakes, and a carbon-fiber exterior trim package on the short options list. 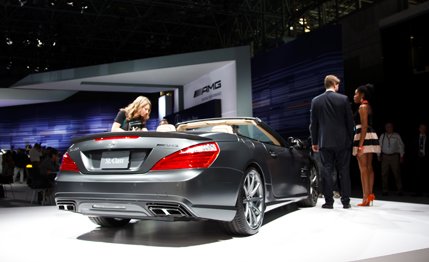 So does Mercedes-Benz really need this car in the lineup, with the similarly priced and far prettier SLS AMG Roadster on one side, and the much cheaper but not much slower SL63 AMG on the other? Of course not. Merc itself acknowledges that the SL65 will not sell in big numbers: “We have developed [this car] for a small but loyal fan base,” says AMG head Ola Källenius. That base is, of course, comprised of folks who walk the lawns of the world’s premier concours events, and who know the rarity of a modern V-12 could place the car on those same lawns in the future. For them, the estimated $200K price may be a bargain.